Nikola, the static site genrator, has just hit 5000 commits! The lucky commit was a99ef7a, with the message Document new previewimage metadata and was authored by Daniel Aleksandersen (Aeyoun).

During 2.5 years, 103 different people committed to the project. The top 10 committers are:

According to OpenHub.Net, there are 54 active developers contributing code in the past year — making Nikola a large open source project, with its contributors count being in the top 2% of all OpenHub teams.

Using data generated by David A. Wheeler’s SLOCCount, 12,002 source lines of code were produced (including tests and internal code). 95.1% of codebase is Python, with the remaining 4.9% split between JavaScript, CSS, Shell, and XSLT.

Over the years, a total of 1426 issues were opened, 778 of which are already closed. 38 versions were released, including the most recent one, v7.1.0, released 15 days ago. The first ever release was version v1.1. It already contained many features still present to this day, and it also used the doit tool to do its job. Here’s a screenshot of the original page: 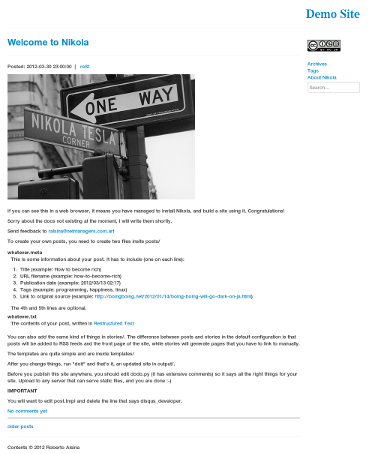 In celebration of this milestone, the demo site from version 1.1 is now online.

Thanks for all the commits — and here’s to the next five thousand!

Nikola is a static site and blog generator, written in Python. It can use Mako and Jinja2 templates, and input in many popular markup formats, such as reStructuredText and Markdown — and can even turn IPython Notebooks into blog posts! It also supports image galleries, and is multilingual. Nikola is flexible, and page builds are extremely fast, courtesy of doit (which is rebuilding only what has been changed).